Interesting Places to Visit in England

It seems that time flies-by so fast nowadays. It's been almost three years now since I visited England. It was autumn 2008 since I made a three-weeks vacation there. Sad to say, I don't have the chance to stay and visit one of Devon’s top beaches. That is one thing I miss during my vacation in England.

There are a lot of stunning and worth-seeing towns and cities to visit in England. During my three weeks stay there, I was able to visit some beautiful and interesting places. I hope during my next visit I can already stay in any Devon cottages and have the chance to explore the beauty of Devon. Also remember that whenever and wherever you spend a vacation in England, there are always affordable cottages to rent and stay for your holiday.

Here are some of the places I had been to in England.

A megacity that is worth-visiting. It is comparable with other global cities in Europe like Paris in France and Berlin, Germany. London is the largest city and the capital of England and United Kingdom. I was able to visit this city twice during my 3-weeks England vacation. I had seen some of its famous sights like the Tower Bridge, London Eye, Tower of London, Buckingham Palace, Westminster Abbey, the Big Ben and the Parliament , Trafalgar Square, St. Paul's Cathedral, Madame Tussaud, Piccadilly Circus and a lot more.

I wish I can witness the 2012 Olympics in England. I need to save money for that. 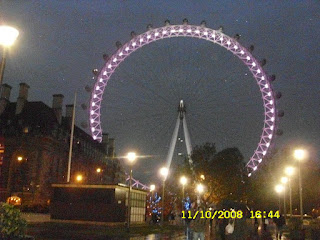 the London Eye at night. sorry guys my picture is not so good. I rode this Ferris wheel alone and I took this image after I rode it.

I am always thinking of Manchester United everytime I remember Manchester. I always see this Football Team in Television and that was also the reason why I want to visit this city last 2008. I did not really saw much of Manchester because a day-visit in this city is just not enough to see everything. At least, I saw some of its landmark like the Manchester Town Hall, the University of Manchester, the Wheel of Manchester (a huge Ferris wheel), the Piccadilly and some other more.

Manchester is famous worldwide for its football clubs like the Manchester United and Manchester City.

My visit to this city was quite memorable because I was able to witness the Christmas market held last 2008. Leeds is a beautiful city located in West Yorkshire, England. This city is also considered to be UK's largest centre for business, legal and financial outside of London. 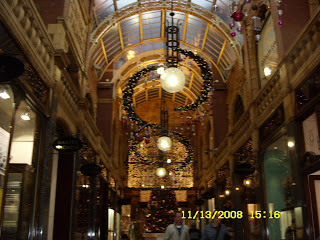 the Victoria Quarter, a famous mall in Leeds. see embedded date in the image, that was the date I was there.

For some Leeds might not be a traditional tourist destination but it has still a lot to give to to its visitors. I am happy and contented to see and experience some of its sights. The Town Hall, Millennium Square, Victoria Quarter, Kirkgate Market and Corn Exchange are only some of the interesting sights I visited there.

The city where I had the chance to visit for a lot of times. Birmingham is an industrial city in West Midlands in Great Britain. It is also the second largest city outside of London in terms of population .

There are a lot of things to do and to experience in this city. A cruise in Birmingham canals, shopping in its famous mall named the Bullring, visiting its museums and galleries, clubbing in Britain's most popular clubs, are only some of the activities you can do in Birmingham.

Some other places and sights I visited there include the Windsor Castle, Warwick Castle, Stratford Upon Avon, Yorkshire, Knaresborough, Northfield and Harrogate. I am still trying to remember the others. Special thanks to all my friends for everything like accommodation, tours, food and most of all their kindness and hospitality.
Posted by Admin at 4:08:00 PM