The Ruins of Ephesus, Turkey

It seems like yesterday when we had a trip in Turkey. One of the interesting sites we visited was the ruins of Ephesus. I can't believed that the ruins in this place was so huge. Our tour guide took us almost three hours to show and to explain the whole ruins of Ephesus known in Turkish as Efes. He also mentioned that Efes was once a Greek city which was later turned out to be a major Roman city. It is located near Selcuk in Izmir Province in Turkey. It is now one of the Seven Wonders of the Ancient World.

I was truly amazed by the ruins of Ephesus. Imagine during those times when they still don't have all the modern equipments like what we have now, but still hey were able to build such amazing architecture. 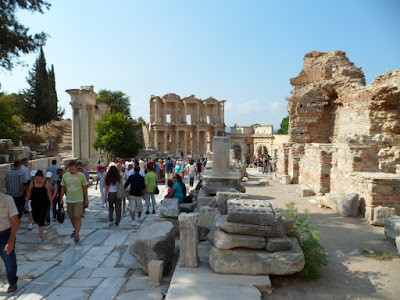 The Kurets or Curetes Street and the Library of Celsus (that building from afar on the middle of the photo here). We had a 10-day trip to Turkey last September 2011.
Posted by Admin at 10:47:00 PM