It was so far a very memorable night walking in El Albayzin. This is a district in Granada in Andalusia, Spain. After our whole day of sightseeing in Granada including the famous Alhambra, we also took the chance to have a night sightseeing in this village.

We walked to the narrow winding streets of this Medieval Moorish past. I remembered some orange trees along the streets and I was fascinated with it. As we stopped under one of the orange trees, I asked one of our tour guides named Lothar if we can eat the fruits of the trees. He picked-up three oranges and gave it to us but he said that we cannot eat it because those were wild ones and taste very bitter and sour.

El Albayzin is located on a hill facing the Alhambra. From the Church of Nicolas, you can have a spectacular view of the palace of Alhambra. It is quite romantic when your loveone or a special someone go walking with you in this part of Granada while watching the lighted Alhambra during the night. At the same time breathing the fresh Spanish air on this hill while chit-chatting with each other. I just remember the beautiful book written by Washington Irving, due to his love for Alhambra. It is entitled The Tales of Alhambra. I love that book.

I am quite sad because I cannot get good images of the lighted Alhambra that night because I don't still have a zoom lens for my Canon SLR camera. Probably in my next visit I can already take some good pictures because I finally have a zoom lens.

After that night sightseeing, we also had the chance to witness some Flamenco dances in this village. While watching the dancers, we were sipping the wine served to us which was included in that trip. It was overall a very wonderful day and night in Granada. I love this city and I am glad that I will be visiting Spain again very soon. It will be a 6-weeks trip and most of the time I will be staying in Madrid. Anyone wants to have a coffee with me? Just kidding folks. I am actually glad to see some college schoolmates and friends who live and work in Spain's capital city.

The countdown begin. See you soon Spain! I am truly missing you! 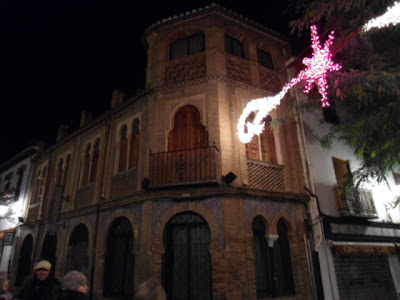 Among the sights to visit here are Granada's archeological museum, the Arab bath complex and the church of San Salvador, built on the remains of a Moorish mosque. 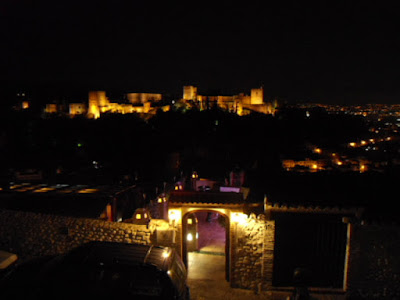 some houses in El Albayzin. from afar you can see spectacular view of the lighted palace of Alhambra.
El Albayzin was declared a world heritage site in 1984, along with the more famous Alhambra.