We visited the capital and largest city of Hungary last summer 2011. It was only a day trip we had in Budapest and I believed it is not really enough to see and explore everything. At least we were able to see most of its sights in the city. Budapest is dubbed as the "Little Paris of Central Europe" and "Pearl of Danube" due to its location and its memorable monuments.

Budapest was once two different cities, according to our tour guide, Buda on the West bank of the Danube River and Pest on the East bank. It is quite interesting to know about the history of this city. I did not really listen to everything which the tour guide was explaining to us. I was busy looking around during our sightseeing tour, besides I was busy taking pictures also which the most important for me. I bought a travel book about Budapest. From there I learned a lot about this city and I can still remember its famous sights. One of it is the Heroes Square below. 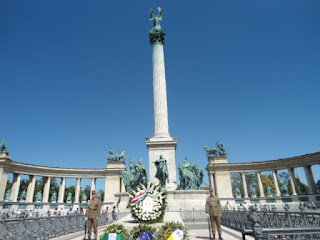 The Heroes square, called as Hősök tere in Hungarian. It is one of the major squares of Budapest, Hungary, rich with historic and political connotations. We were there last August 2011.
Posted by Admin at 10:43:00 PM