Cruising in Danube By Wachau, Austria

It's more that three months since had a cruise in Wachau, Austria. This Austrian valley has a picturesque landscape formed by the Danube river, the second longest river in Europe. Our cruise started in Spitz until Krems. It was a five-days trip were we also visited Budapest and other towns and cities in Hungary. Vienna, Austria was also included in that trip.

After that cruise we had in Wachau which was on the fifth day of our trip, we already proceeded home. It was so far a beautiful experience. 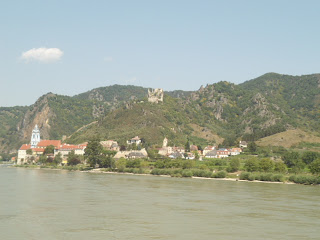 Dürnstein town, one of the places we passed by during that trip last August 2011.
Posted by Admin at 1:36:00 PM