My friend told me before that she wants to visit Karlovy Vary when she will make a vacation in Europe. Sad to say, she was not able to go there. After seeing some images of Karlovy Vary, also known as Carlsbad in English, my desire to visit this place grew bigger. Thanks to a dear friend Joy, who had the courage to drive to Czech Republic last October 9, 2011.

Karlovy Vary, meaning "Charles' Bath" was named after Charles IV, King of Bohemia and Holy Roman Emperor, who founded the city in 1370. This place is famous for their hot springs and its colorful and whimsical architecture. Because of these reasons, it became a popular tourist destination.

The town, along with Prague, was the filming location of many scenes identified as being in Montenegro in the 2006 movie Casino Royale.

More updates and travel snapshots to be posted in these travel sites below. 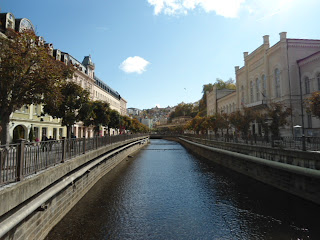 a river in Karlovy Vary, I guess this is the Tepla river. 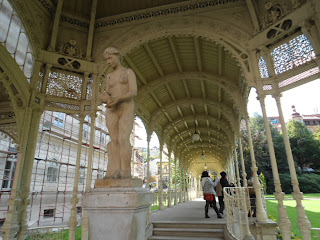 a Colonnade on the side of the Military Spa.