This is a beautiful view of our hotel in Kusadasi, Turkey. This was taken during our vacation last month. Kusadasi is a resort town and its primary industry is tourism. Its location is very nice because it is located in the Aegean coast.

The name comes from 'kuş' (bird) and 'ada' (island) as the peninsula has the shape of a bird's head (as seen from the sea). During Byzantine times, it was known as Ephesus Neopolis; under the Genovese and Venetians, Scala Nova or Scala Nuova. Kuş-Adası was adopted in its place at the beginning of the 20th century. Today, citizens of Kuşadası often shorten the name to Ada. 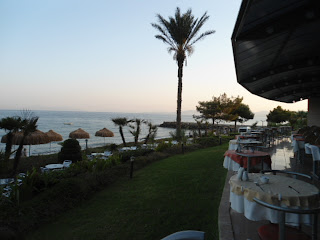 Click the logo to see more skies from all over the world..Have fun!

Beautiful silhouettes against the pastel sky!

interesting, I've never thought of Turkey as being 'tropical'

looks like a lovely spot to enjoy some R&R