The Linderhof Palace by King Ludwig II of Bavaria

This is not a so big palace or castle like Neuschwanstein but it is very beautiful. Alone its location and surrounding is also nice. The Linderhof Palace was built by King Ludwig II of Bavaria. It is located near Ettal Abbey near near Oberammergau in southwest Bavaria, Germany.

I normally don't want to go inside the palace because as the time I knew that pictures are not allowed to take inside its premises, it already discouraged me. Thanks to good friends who encouraged me.

I was truly amazed by the architecture and wood carvings, frescos, paintings and decorations inside. What also caught my eyes are the so-called Hall of Mirrors. This room was used by King Ludwig II as some kind of living room. He enjoyed sitting in the niche, sometimes reading there the whole night. Because Ludwig II used to sleep in the daytime and stay awake in the night, the mirrors created an unimaginable effect for him when they reflected the light of the candles a thousand times. The parallel placement of some mirrors evoke the illusion of a never ending avenue. 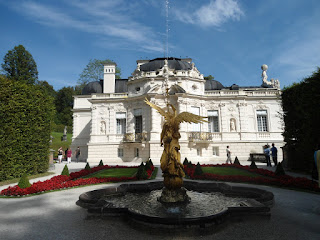 The fountain with a golden statue at the left side of Linderhof Palace. This was taken during our visit last September 2011.
Posted by Admin at 11:19:00 PM

Beautiful castle...thanks for sharing
such a beauty with us!