It's Halloween again! I believed some of you might be at a theme park at the moment celebrating this festival. Other might be attending a costume party, lighting bonfires outside, telling scary stories or watching horror films.

We just came home some hours ago witnessing a Halloween celebration. It was an enjoyable one. The children were happy after collecting a lot of sweets and candies in "Trick or Treat" in the neighborhood. Most of them were wearing Halloween costumes. From vampires, to fairies, soldiers, princess and a lot of Halloween motives. 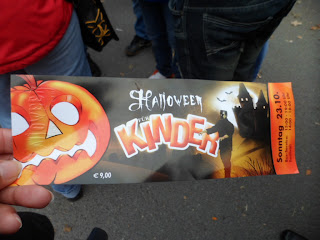 our Halloween ticket in Frankenstein castle- Oct. 30, 2001.
Trick-or-treating is a customary celebration for children on Halloween. Children go in costume from house to house, asking for treats such as candy or sometimes money, with the question, "Trick or treat?" The word "trick" refers to a (mostly idle) "threat" to perform mischief on the homeowners or their property if no treat is given. In some parts of Scotland children still go guising. In this custom the child performs some sort of trick, i.e. sings a song or tells a ghost story, to earn their treats. 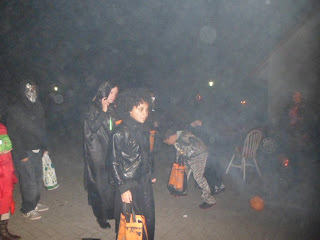