Dining at Hofbräuhaus in Munich, Germany

My friends Joy and Ritz were satisfied and happy with our dinner (which is too early at 4:00 PM) during our short trip to Munich last Aug. 9, 2011. After our sightseeing in Nymphenburg Palace, also known as Nymph's Castle, we proceeded to Hofbräuhaus in Munich, Germany. The waitress who was wearing a Dirndl, the traditional costume of Bavaria, told us that it will take 15 to 20 minutes for our order to be served. I already expected it longer since there are a lot of customers and tourists who are trying to experience and to taste Bavarian delicacies. At least, my friends were satisfied with what we had eaten...and me too! We proceeded for more sightseeing at the Old City especially in Marienplatz. 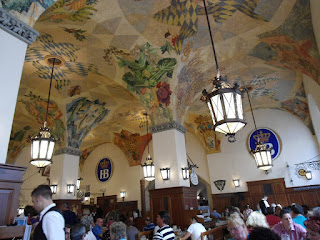 it was my second dining in Hofbräuhaus last Aug. 9, 2011 but had been to this place for some times already.

The Staatliches Hofbräuhaus in München (state court-brewery in Munich, also Hofbräu München) is a brewery in Munich, Bavaria, Germany, owned by the state government. The Hof (court) comes from the brewery's history as a royal brewery in the Kingdom of Bavaria.

The Hofbräuhaus in Munich was one of the beer halls used by the Nazi Party to declare policies and hold functions. On February 24, 1920, Adolf Hitler proclaimed the twenty-five theses of the National Socialist program at the Hofbräuhaus, which reconstituted the German Workers' Party as the National Socialist German Workers' Party, known as the Nazi Party. Hundreds of tourists visit these sites, including the Hofbräuhaus in Munich every year. One author claims that some of the first violent attacks on Jews took place at the Hofbräuhaus. http://en.wikipedia.org/wiki/Hofbr%C3%A4uhaus