It seems that I am quite busy for the past weeks. I want to do a lot of things but my power won't allow me to do everything. That is the advantage if we don't have a boss..right guys? Anyway, I can't wait for another trip to come next month. I will be visiting Vienna for the second time and also Budapest in Hungary and other places in this area. I can't thank enough my sponsors for this coming trip....just kidding guys.

I can't stay too long enough now. It is past midnight and I need to wake-up early later to do some errands. I also need to get ready for a weekend trip with friends. Again, thanks for the donors...just kidding guys! I am thankful to all good friends around who always invite me in their trips.

For now, I am sharing an image from Vienna, Austria. The building you see in the background is the Hofburg Palace. 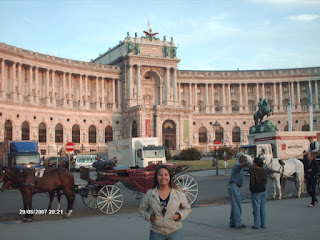 someone's striking a pose in front of Hofburg Palace. taken during my first visit last June 2007.

Hofburg Palace is a palace located in Vienna, Austria, that has housed some of the most powerful people in Austrian history, including the Habsburg dynasty, rulers of the Austro-Hungarian empire. It currently serves as the official residence of the President of Austria.
Posted by Admin at 12:18:00 AM