The Park and The Adolphe Bridge in Luxembourg

It is almost a year now since I visited Luxembourg. We had a bus trip that time from Brussels, Belgium to this landlocked country in western Europe. It is called a landlocked because it is bordered by Germany, France and Belgium.

Luxembourg has a very high standard of living and is considered to be one of the top three richest countries in the world. It is just a small country, in fact the second smallest of the European Union member states, but visiting this country in a day is not enough to see everything.

The Adolphe bridge is a must-to see in Luxembourg. 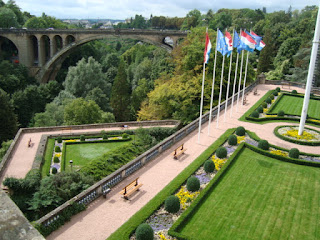 The beautiful park and the Pont Adolphe or Adolphe Bridge, which was built between 1900 and 1903. It was planned and drawn by architect Paul Sejourne. It overhangs a large expanse open ground and the magnificent parks that border the Petrusse.
Posted by Admin at 11:20:00 AM

A nice picture and wow- what a beautiful and old bridge! :)