The Easter Fountain in Lengenfeld, Germany

I believed most of you especially the Christians are very familiar about Easter. It is the central feast in the Christian liturgical year. This is a celebration when Jesus rose from the dead on the third day after his crucifixion. It is called called Easter Day or Easter Sunday.

I have here an Osterbrunnen (German), called as Easter fountain in English. This was taken in Lengenfeld, a village in Upper Palatinate, Bavaria, Germany. 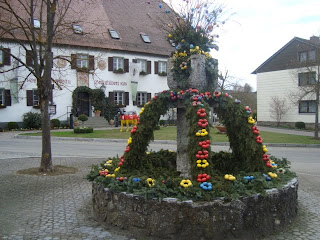 taken last Easter season 2010.
Secular customs, such as the Easter Bunny and Easter egg hunts, have become part of the holiday's modern celebrations and are often observed by Christians and non-Christians alike.
Posted by Admin at 11:54:00 PM