The Nuremberg Castle in Bavaria, Germany

The image you see below is only a part of Nuremberg Castle. This castle comprises of three parts according to wikipedia: the imperial castle ("Kaiserburg"), some buildings of the Burgraves of Nuremberg ("Burggrafenburg"), and the municipal buildings of the Imperial City at the eastern site ("Reichsstädtische Bauten"). It is considered to be one of the most important fortresses in Europe because of its history and architecture. 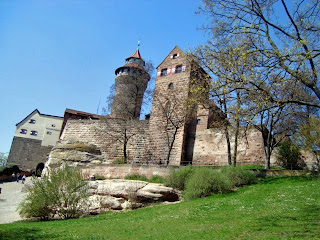 I had visited this castle for a lot of times already. This was taken during one of my visits last August 2010. The castle is located on a sandstone rock in the north of the historical city of Nuremberg, Bavaria, Germany.
Posted by Admin at 11:20:00 PM