My Top Five Places to Visit in France

I had a conversation with hubby last week. I told him that my feet got itchy again. I need to go somewhere. First, he was hesitant that I will travel alone again. Later on, I finally convinced him especially that I found affordable villa holidays to stay-in in some places in France. There are still a lot of places that I wish to visit in this country and here are my top 5.

This so-called "city of lights" is truly a must-see when you visit Europe. Paris is the capital and the largest city of France. I had been to this Paris twice but when I still have the chance to visit it again in the future, I will for sure grab it. I had seen its top 3 landmarks, the Eiffel Tower, the Arc de Triomphe and the Notre Dame Cathedral. Due to these and its other historical and interesting sights, Paris has become a popular tourists destination not only in Europe but around the globe as well. Imagine around 45 millions of tourist every year! That is amazing! 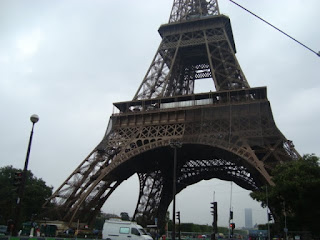 the Eiffel Tower. This is the most famous landmark of Paris. This was taken during my second visit to this city last August 2010.

This is another city that I wish to visit in France. I always watch over the Television about the Cannes Film Festival that is held here every year. Cannes is considered to be a famous tourist destination in French Riviera. It is also well-known for its luxury shops, hotels and restaurants.

Have you heard about the Battle of Normandy? I love history and this is one of the reasons why I would love to visit this place. It is a very historical place and it always fascinates me. It is also known for its architecture like the Abbey of Jumièges, near Rouen , the Abbey of Mont Saint Michel and the Abbey of Bec.

We happened to pass-by this city during my first visit to Paris. Reims has become a major city during the Roman Empire. For this reason, I believed that there are a lot of historical sights to see here. I would love to especially see the famous cathedral of Reims.

I was so happy that I did had a chance to visit this city last December. I was able to experience its famous Christmas market. Strasbourg is the official seat of the European Parliament. It is also the is the capital and principal city of the Alsace region in north-eastern France. I found Strasbourg a very interesting city to visit and I still want to visit it again in the future. 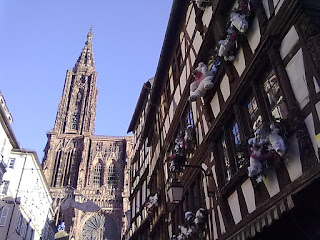 the famous Cathedral in Strasbourg. This was taken during our visit last December 2010.

I am looking for cheap villas in France from time to time. Who knows I will be visiting one or two of these places this year. I know there are always cheap villas, apartments and holiday rentals in any European destinations.
Posted by Admin at 6:24:00 PM

Hi! :)
You have something to look award for here,I see.. I haven't been so many times to Paris, not seen enough.. but the Eiffel Tower I've visited.. Great tower, enormous view! :)

Have a nice time and the best wishes! :)