This is one of the most beautiful cathedrals I had seen in Germany. I have been to this cathedral thrice already and I always love it. I was especially amazed by the beautiful frescos and paintings especially on its ceiling. It is truly an amazing work of art and architecture. St. Stephan's Cathedral, or "Dom St. Stephan" in German, is a baroque church from 1688 in Passau, Germany. It is the seat of the Catholic Bishop of Passau and the main church of his diocese.

Since 730, there have been many churches built on the site of the current cathedral. The current church, a baroque building around 100 metres (328 ft) long, was built from 1668 to 1693 after a fire in 1662 destroyed its predecessor, of which only the late gothic eastern side remains. The cathedral's overall plan was made by Carlo Lurago, its interior decoration by Giovanni Battista Carlone, and its frescos by Carpoforo Tencalla.

The image below was taken during my third visit last August 2010. 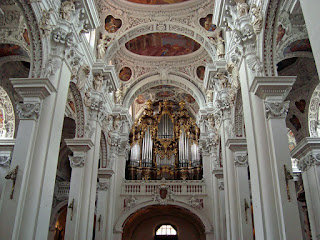 the beautiful frescos and paintings on its ceiling. You can see in the middle the organ of the cathedral.
Over time, the Passau Cathedral has acquired the largest organ outside of the United States. It is also the largest cathedral organ in the world. The organ currently has 17,774 pipes and 233 registers, all of which can be played with the five-manual general console in the gallery. 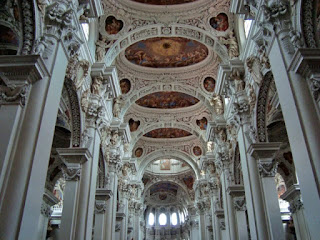 The cathedral has eight large bells in the bell rooms in the north and south towers. The heaviest,"Pummerin" at 7550 kg cast in 1952 and "Sturmerin" weighing 5300 kg cast in 1733 hang in the south tower. The other six bells hang in the north tower. They include: "Misericordia" weighing 6000 kg, the Angelus bell, "Predigerin", "Elfuhrglocken", the Choir bell, and "Dignitar". A ninth bell, the "Zeichenglocke" hangs near the sacristy door. more here
Posted by Admin at 11:24:00 PM