Winter Visit to the Neuschwanstein Castle in Hohenschwangau, Bavaria

This is already my third visit to this famous castle of King Ludwig II of Bavaria, Germany. Seeing Neuschwanstein Castle in different seasons of the year especially during winter season is truly a fascinating experience. For now, I am just sharing some images taken during my visit today with friends. This castle was the inspiration for Disneyland's Sleeping Beauty Castle.

This architecture is truly amazing and marvelous! 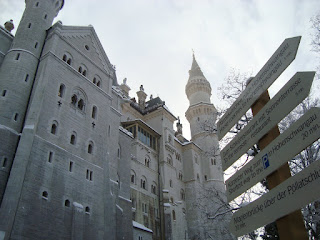 In 1868, the ruins of the medieval twin castles were demolished completely; the remains of the old keep were blown up. The foundation stone for the Palace was laid on September 5, 1869; in 1872 its cellar was completed and in 1876, everything up to the first floor. But the Gatehouse was finished first. At the end of the year 1873 it was completed and fully furnished, allowing Ludwig to take provisional lodgings there and observe the further construction work. In 1874, direction of the civil works passed from Eduard Riedel to Georg von Dollmann. The topping out ceremony for the Palas was in 1880, and in 1884, the king could move into the new building. In the same year the direction of the project passed to Julius Hofmann, after Dollmann had fallen in disgrace. 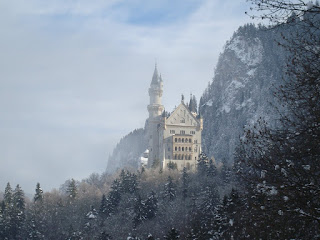 The palace was erected as a conventional brick construction and later encased with other types of rock. The white limestone used for the fronts came from a nearby quarry. The sandstone bricks for the portals and bay windows came from Schlaitdorf in Württemberg. Marble from Untersberg near Salzburg was used for the windows, the arch ribs, the columns and the capitals. The Throne Hall was a later addition to the plans and required a steel framework. more here 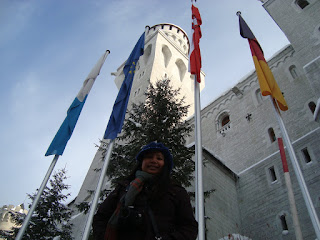 striking a pose while waiting for my friends who were having a tour inside the castle. I did not go anymore because I was already there twice. Besides taking pictures inside is forbidden.
Posted by Admin at 1:47:00 AM

WOW!! WHAT a lovely castle!! And situated high up by the mountain top? What a gorgeous photo in the middle, like a Fairy Tale it seems like, the castle, the place..

But.. I have to admit the first photo gives me some goosebumps, when I look to the castle.. I don't know itf I would dare to walk in there.. ;)

Best regards from me! :)