It's Fasching Time in Germany

It's Fasching time again in Germany. This is the German word for carnival. Some of the most famous cities in Germany that celebrate Fasching are Mainz, Cologne and Düsseldorf. Some other cities and towns like the ones we witnessed before in Dietfurt, Velburg and Breitenbrunn are also celebrating it.

During this festival you can see people who are dressed in different colourful and attractive costumes. Almost every town has also its own special carnival. Taking for example the Chinese Carnival in Dietfurt, where most of the participants are wearing Chinese motives and costumes.

Living in Germany is never boring but a lot of fun especially if you know all the festivities around. Here are some images we took last 2009. 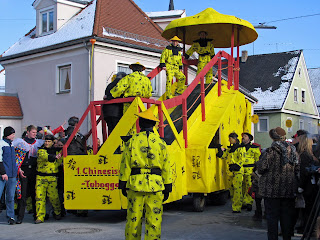 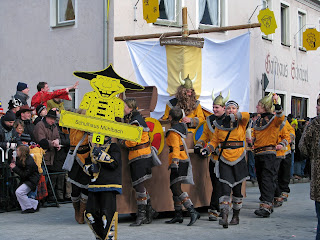 Although the festival and party season in Germany starts as early as the beginning of January, the actual carnival week starts on the Thursday ("Weiberfastnacht") before Ash Wednesday. German Carnival parades are held on the weekend before and especially on Rosenmontag (Rose Monday), the day before Shrove Tuesday, and sometimes also on Shrove Tuesday ("Faschingsdienstag") in the suburbs of larger carnival cities. The carnival session begins each year on 11 November at 11:11 a.m. and finishes on Ash Wednesday with the main festivities happening around Rosenmontag; this time is also called the "Fifth Season."
Posted by Admin at 2:44:00 PM