It is only enough for me before to watch the images of friends who had visited the capital city of Italy. I keep telling myself, one day I will visit Rome. That wish came true and it was very compensating. I was very fascinated when I visited Rome with a friend. I was truly impressed by its historical setting, the various ruins from Colosseum to Foro Romano especially after a visit to Vatican City. I can't express how I felt when I saw and experienced this place. It was truly marvelous. I am very happy to be in Rome once in my life. When given another chance in the future to visit it again, for sure I will! wanna come with me? lol! 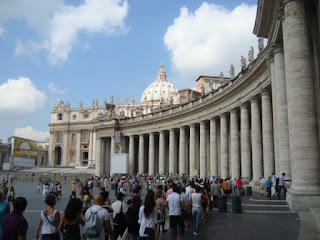 at St. Peter's Square. You can see the Dome of St. Peter's Basilica at the background in Vatican City, Rome, Italy. This was taken during our visit last August 2010.
Etymology of Rome

About the origin of the name Roma several hypotheses have been advanced. The most important are the following:

* from Rommylos (Romulus), son of Ascanius and founder of the city;
* from Rumon or Rumen, archaic name of Tiber. It has the same root of the Greek verb ῥέω (rhèo) and of the Latin verb ruo, which both mean "flow";
* from the Etruscan word ruma, whose root is *rum-, "teat", with possible reference either to the totem wolf that adopted and suckled the cognately named twins Romulus and Remus, or to the shape of Palatine and Aventine hills;
* from the Greek word ῤώμη (rhòme), which means strength;
http://en.wikipedia.org/wiki/Rome
Posted by Admin at 3:10:00 PM