I believed most of you know about the Euro Currency. It is the monetary unit and the official currency of the European Union. Actually, only 16 out of 27 EU countries are using this currency. These countries are Austria, Belgium, Cyprus, Finland, France, Germany, Greece, Ireland, Italy, Luxembourg, Malta, the Netherlands, Portugal, Slovakia, Slovenia and Spain. The euro has an € sign and a EUR code.

Euro is said to be the second most traded currency in the whole world next to U.S. dollar.

Below are the hundred Euro bills. This money is already enough to pay for a plane ticket back in my home country..lol! Merry Christmas everyone and have a nice weekend too! 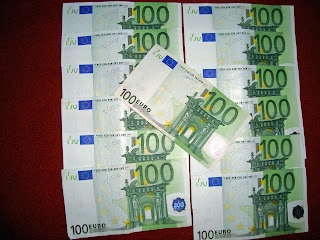 The name euro was officially adopted on 16 December 1995. The euro was introduced to world financial markets as an accounting currency on 1 January 1999, replacing the former European Currency Unit (ECU) at a ratio of 1:1. Euro coins and banknotes entered circulation on 1 January 2002.
Posted by Admin at 1:11:00 AM