I will be sharing my travel experience to Paris this time. I have been to this city twice and if given another chance to visit it in the future, for sure I will grab it. There are just a lot of things to see and experience in this city and a day or two is not enough to see all. 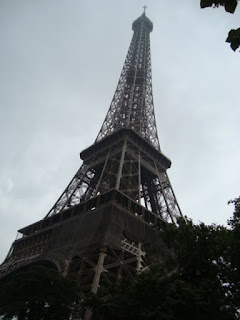 For all you know, Paris is considered to be one of the most expensive cities in the world. According to the latest survey from Economist Intelligence Unit in 2010, it is the world's most expensive city to live in. Thus, touring this city can cost you a fortune. But you don't need to worry about because no matter what, you can still find a cheap Paris hotel to stay during your visit.

If you are diligent enough to search for the cheapest hostel in Paris or Bed and Breakfast, for sure you will find one that best suits your budget. Would you believe that we were able to book online a 3 star hotel for only 35 Euros a night double bed and it is located near Gare du Nord, the central train station of Paris. That was quite a good deal.

Here are the Top 3 Sights to Visit in Paris

If you are talking about this architecture, you are also talking about Paris because it is the most famous and prominent symbol of this city. This structure is not only known in Europe but in the whole world as well. It was named after its designer engineer Gustav Eiffel and was built as an entry to the 1889 World's Fair. It is 324 meters or 1,063 feet tall and is now the second tallest structure in France after Millau Viaduct.

Notre Dame de Paris or Our Lady of Paris, is a Catholic cathedral with Gothic architecture. It is a 12th century cathedral which is considered to be one of the top tourist destination in Paris. It was one of the first buildings in the world to use the flying buttress or arched exterior supports. Notre Dame Cathedral is also one of the finest example of French Gothic architecture not only in France but in whole of Europe as well.

If Munich, Germany has a so-called Siegestor (Arch of Triumph) and Rome has an Arch of Constantine, I believed the most famous one is the Arc de Triomphe in Paris, France. 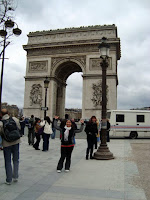 It is a monument located in the center of Place Charles de Gaulle, at the western end of the Champs-Élysées. You can also see a smaller arch like this near Louvre. I had also seen its replica in Paris, Las Vegas, Nevada.

It was a great experience visiting one of the most interesting and top influential cities of the world. I simply love Paris!

Here are some images I took during my visits to Paris. Feel free to click the second one to make it larger. For sure, you will see somebody who is striking a pose in front of the Arch of Triumph.
Posted by Admin at 8:15:00 PM

Labels: My Travel Posts, sightseeing in Paris, trip to Paris

I should see Eiffel Tower before I die!
I'd love to be here together with my wife...

Dear Blogger
You really are a true lover of Paris as appears from your blogs revealing finest of the details about travel secrets. I see that your blog is about travel. I want to share some info with you. Citymedia foundation(http://citymediafoundation.org) has launched www.city.vi , a network of 68,000 city specific video sites, where you can share videos about cities and regions across the world. like for Vancouver videos you can visit http://Vancouver.vi . You can also find out about other cities that you are interested . Hope to see you there