Here is the right bridge that fit the song I mentioned above. I would then say, "Tower bridge is falling down".

The tower bridge crosses the River Thames in London, England. It is 244 meters long and with a span of 61 meters. Its construction started in 1886 and was opened in June 30, 1894. 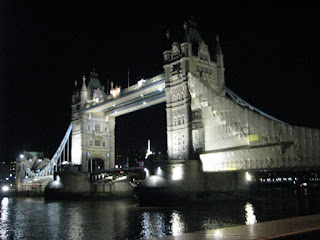 The bridge connects The Borough (Southwark, south of the river, left of picture) to the heart of the City of London Financial District.