Another dream come true! I am very thankful that my dream of visiting one of the beautiful cities in Europe was finally materialized. One of the cities we visited last August 2010 is Rome, the capital city of Italy. It was a four-day trip we had in this city. During our first day tour, we visited Vatican City. Special mention is St. Peter's Cathedral, also known as St. Peter's Basilica or known in Italian as the Basilica Papale di San Pietro in Vaticano.

This Cathedral is known to have the largest interior of all Christian churches in the world. It is one of the holiest Catholic sites. It is a Late Renaissance church and known as the greatest of all churches of Christendom.

Below are some of some images I took during our visit. I simply love Rome! 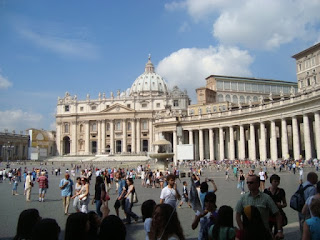 St. Peter's Square in Vatican City. It is called Piazza San Pietro in Italian. You can see the cupola of St. Peter's Cathedral in the background. 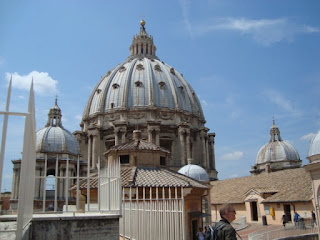 the cupola or dome of St. Peter's Balisica. We climbed some hundred steps in going up. To reach the dome, one has to climb for 320 steps after taking the elevator. For those who have heart ailments are being warned when going up.
Posted by Admin at 9:09:00 PM