Baclayon Church is a Roman Catholic church and one of the oldest churches in Bohol, Philippines . It was built during the Spanish colonization in this country. It is around 6km from Tagbilaran City, the capital of Bohol.

I had the chance to visit this church for the second time. My first visit was in October 2006 and the second time was in February 2010. Here is an image I took during my second visit. I was trying to find a photo taken from inside the church but can't it right now. Maybe next time again. 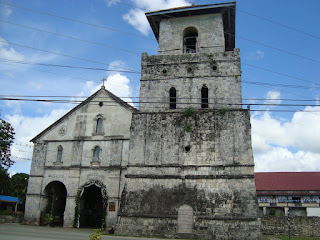 The Church of Our Lady of the Immaculate Conception in Baclayon is considered to be one of the oldest churches in the Philippines. It is one of the best presevered Jesuit build churches in the region, although in the 19th century, the Augustinian Recollects added a modern facade and a number of stone buildings that now surround the church. The first Spanish missionaries or doctrineros in the region, Fr. Juan de Torres and Fr. Gabriel Sanchez, first settled in Baclayon in 1595. Shortly after their arrival, a visita was erected on the spot. Although Baclayon was the first seat of the Spanish Jesuit missionaries, fear of Moro mauraders soon forced them to move their headquarters more inland, to Loboc. Only in 1717, Baclayon became a parish, and construction of a new church commenced. Some 200 native forced laborers constructed the church from coral stones, which they took from the sea, cut into square blocks, and piled on to each other. They used bamboo to move and lift the stones in position, and used the white of a million eggs as to cement them together. The current building was completed in 1727. The church obtained a large bell in 1835. In the Baclayon church is a dungeon, which was used to punish natives who violated the rules of the Roman Catholic Church. more here
Posted by Admin at 10:35:00 AM

I was there last February and it's like wow! the church have stood the test of time...