I love this part of Disneyland Resort wherein you have the chance to see and experience the simulation of Golden State, flying over the Golden Gate Bridge in San Francisco, Redwood Creek in Humboldt County, Napa Valley, Monterey, Lake Tahoe, Yosemite National Park (including Yosemite Falls and Half Dome), the PGA West golf course in La Quinta (credited in the queue video presentation as Palm Springs), Camarillo, Anza-Borrego Desert State Park, San Diego, Malibu, Los Angeles, and Disneyland itself. The last few scenes transition from daytime to dusk and then to night, culminating in Disneyland's fireworks surrounding the riders in the nighttime sky. Lasting about four minutes and forty seconds, the attraction predominantly focuses on the various landscapes of the state, although various human activities can also be seen - snow skiing, river rafting, kayaking, horseback riding, hot air ballooning, and the U.S. Air Force Thunderbirds are all featured prominently in the film.

Here is an image I took during our visit in Disneyland last 2008. 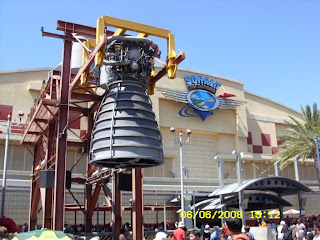 Soarin' Over California was first conceptualized in 1996 as "Ultra Flight," a name which can still be seen on the tower consoles of the California Adventure attraction. It was to feature an OMNIMAX screen with an inverted track allowing guests to fly over California's landmarks. The attraction would have three load levels and the system would operate on a horizontal cable, much like a dry cleaner's rack. This plan was abandoned, however, when it was determined that the construction and labor costs for that design would be prohibitive. It seemed that Soarin' wouldn't become a reality until Imagineer Mark Sumner developed a different idea for the ride vehicles, using an Erector Set and string to create a working model. This design would allow Disney to efficiently load guests on one level instead of three, thus cutting construction and labor costs greatly. http://en.wikipedia.org/wiki/Soarin%27_Over_California
Posted by Admin at 2:35:00 PM