Tarsier, The Smallest Monkey in The World

Have you seen the smallest monkey in the world? This animal called Tarsier is found only in Southeast Asia. Tarsiers are haplorrhine primates of the genus Tarsius, a genus in the family Tarsiidae, which is itself the lone extant family within the infraorder Tarsiiformes.

I took this picture during our visit in Bohol Island last Feb. 2010. This is a very interesting animal and in the Philippines it is now considered to be in the list of endangered species. The first time I saw these animals was in 2006, also in Bohol. That was a nice experience seeing this animal again. Be sure not to turn on your camera flash when taking a picture of it. 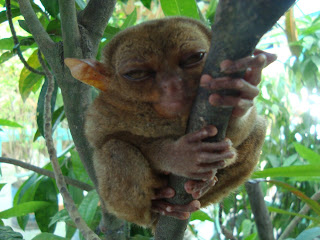 Tarsiers are small animals with enormous eyes; each eyeball is approximately 16 mm in diameter and is as large as their entire brain. Tarsiers also have very long hind limbs. In fact, their feet have extremely elongated tarsus bones, from which the animals get their name. The head and body range from 10 to 15 cm in length, but the hind limbs are about twice this long (including the feet), and they also have a slender tail from 20 to 25 cm long. Their fingers are also elongated, with the third finger being about the same length as the upper arm. Most of the digits have nails, but the second and third toes of the hind feet bear claws instead, which are used for grooming. Tarsiers have very soft, velvety fur, which is generally buff, beige, or ochre in color. wikipedia.
Posted by Euroangel at 10:29:00 PM