I lived for some years in Cebu and I always passed this place but only last January 2010 did I had the chance to enter it. Fort San Pedro or Fuerza San Pedro is a military defence structure, built by Spanish and indigenous Cebuano labourers under the command of Spanish conquistador, Miguel López de Legazpi and the Spanish Government in Cebu. It is located in the area now called Plaza Indepedencia, in the Pier Area of Cebu City, Philippines.
We made a tour around and the picture below is one of the photos I took. I have a personal experience to share next time during our visit. 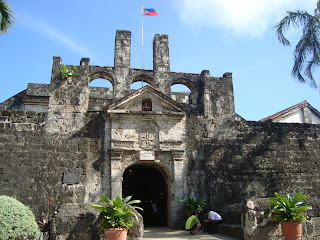 Fort San Pedro is the smallest, oldest triangular bastion fort in the country was built in 1738 to repel Muslim raiders. In turn, it served as a stronghold for Filipino revolutionaries near the end of the 19'th Century. This served as the nucleus of the first Spanish settlement in the Philippines.

Click the logo to join and see more scenic photos around the world! Thanks to The Holley Herald for hosting this beautiful meme! Have a great day to all!

Wow, looks like a interesting place. I love history and old structures.

I love old buildings and this is a wonderful example.
Cheers.
Melbourne Daily Photo

It's Fort Santiago's little brother! Cool. I just love these Spanish-era structures. Wish we had more left in Manila aside from Intramuros.

Have a sweet Scenic Sunday! :)

OH this is cute place to see. Happy SS!

Wonderful shot! Looks like a very interesting place to visit.