The statue you can see in Queen Victoria's Memorial in front of Buckingham Palace in London. This was taken during my three weeks vacation in England last year. Interesting place to visit in London! 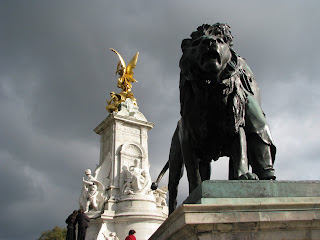 The Victoria Memorial is a sculpture in London, placed at the centre of Queen's Gardens in front of Buckingham Palace.

It was built by the sculptor Sir Thomas Brock, in 1911. The surround was constructed by the architect Sir Aston Webb, from 2,300 tons of white marble. It is a Grade I listed building.

It has a large statue of Queen Victoria facing north-eastwards towards The Mall. The other sides of the monument feature dark patinated bronze statues of the Angel of Justice (facing north-westwards toward Green Park), the Angel of Truth (facing south-eastwards) and Charity facing Buckingham Palace. On the pinnacle, is Victory with two seated figures. The subsidiary figures were gifted by the people of New Zealand.

The whole sculpture has a nautical theme, much like the rest of the mall (Admiralty Arch etc). This can be seen in the mermaids, mermen and a hippogriff, all of which are suggestive of Great Britain's naval power.
Posted by Euroangel at 6:30:00 PM