The Bullring in Birmingham 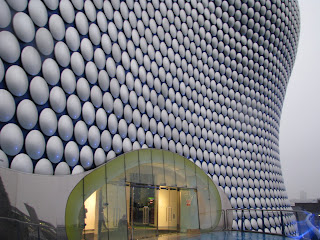 copyright photo by: Euroangel
The Bullring in Birmingham City, England..a very big shopping mall in the heart of the city...we always passed this mall and was inside for some times..I even bought some stuffs in one of its shops...cool place for shopping!! here is a little info about it..courtesy of Wikipedia..

The Bull Ring (promotionally known as Bullring) is a major commercial area of Birmingham, England. It has been an important feature of Birmingham since the Middle Ages, when its market was first held. It has been developed into a shopping centre twice; first in the 1960s, and then in the 2000s.

The site is located on the edge of the sandstone city ridge which results in the steep gradient towards Digbeth. The slope drops approximately 15 metres (49.2 ft) from New Street to St Martin's Church.

The current shopping centre is one of the largest in the United Kingdom, and with an average of 36.5 million visitors a year, it is Britain's busiest. It also houses one of only four Selfridges department stores, the others being in London, Manchester, and Trafford; and the second largest branch of Debenhams, spread over 4 floors. Consequently, the centre has been a huge success, attracting commerce from all over the world, including New York.
Posted by Euroangel at 10:08:00 PM